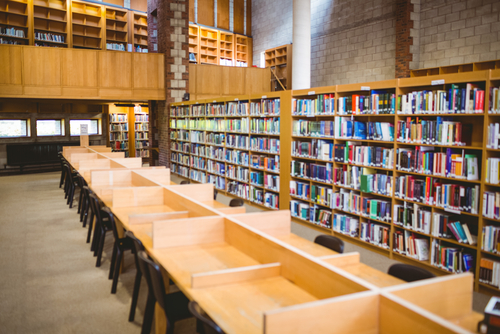 Most Master’s degrees require a significant amount of research — possibly more so than for an undergraduate degree. So a good library is key to a grad student’s success. American universities have no shortage of beautiful, interesting or unusual libraries. Choosing just ten universities having such libraries is no easy task. The ten universities we’ve picked here have one or more libraries that are not only visually interesting, but also have either rare or interesting collections, a large number of library buildings, historical significance, or some other unique criteria.

The Yale University Library system is big one, with just under 12.8M volumes as of 2012. According to the ALA, only Harvard (16.8M volumes) and University of Illinois Urbana-Champaign (13.2M) are larger (2012 figures). With such a large system, there are not surprisingly a number of important libraries, including the Gothic Revival-styled Sterling Memorial Library. However, it’s the Beinecke Rare Book and Manuscript Library (BRBL) — gifted by the Beinecke family in 1963 — that quite possibly is one of the more unusual university libraries.

The building, designed by prize-winning architect Gordon Bunshaft, has two personalities. On the outside it’s a bleak, gray box that looks like a crate marked off with a grid surrounding the entire building (made windowless to protect rare items from direct sunlight). However, on the inside (pictured above — distortion due to camera lens), it is decidedly more colorful, partially due to the coloring of the surroundings as well as the lighting. Beinecke Library’s shelves are climate-controlled to protect the collections, and there are small, illuminated display cases throughout.

BRBL is is one of the largest existing collections of rare books and manuscripts, and the building is reputedly the largest “in the world reserved exclusively for the preservation of rare books and manuscripts.” Amongst the collections is the mysterious and as yet only partially-deciphered 15th century illustrated Voynich Codex manuscript, written in a script that does not seem to match any known human language.

How can you not love a library named for a master of storytelling, Theodor Seuss Geisel, aka Dr. Seuss, and second wife Audrey Stone Dimond (who were long-time residents of La Jolla, California)? Admittedly, it’s a bit futuristic-looking, upside-down pyramid and almost spaceship-like. It’s appeared in a number of science fiction and other movies, as well TV commercials and is even referenced at length in a science fiction novel. The building, designed by architect William Pereira, has a total of eight stories, with two levels underground, and with the third “floor” actually being the open/outside forum. (One of Pereira’s most notable other designs is the Transamerica Pyramid – the tallest building in San Francisco’s financial district.)

In addition to other collections, UCSD’s Geisel Library houses the approximately 8,500-item Dr. Seuss collection of Geisel’s original drawings, sketches, notebooks, manuscripts, photos and other items, starting from Geisel’s high school activities in 1919 up to his passing in 1991.

Louis Round Wilson Library, pictured above, at UNC Chapel Hill is named after former UNC librarian Louis Round Wilson. Once the main library of UNC, it was built in 1929 and now contains the university’s special collections, including the Rare Books Collection and the NCC. The NCC, or North Carolina Collection, is reputedly the largest printed collection about any single U.S. state.

Davis Library is now UNC’s main library, and is one of several libraries in the system, which boasts just over 7M bound volumes as of 2012. In addition to having a School of Information and Library Science (SILS), the university is home to the ibiblio project, a collection about public and open source collections covering software, music, art, history, and more. This project, formerly SunSITE.unc.edu and MetaLab, is run by SILS and the School of Journalism and Mass Communication, with partners that include IBM and SourceForge.

Columbia University is fortunate not only to have the beautiful neoclassical Butler Library — built in 1934 and pictured at top of this article, and which is rated in some publications as one of the United States’ most beautiful college libraries — but also Low Memorial Library, pictured here. The Low Memorial Library, named after former university president Seth Low’s father and built in the Roman classical style, is a National Historic Landmark. Currently, it functions as administrative offices and visitor’s center. The collective Columbia library system, which encompasses 22 on-campus and affiliated libraries, has nearly 12M (11.9M) volumes and 500K rare books. Its Wikipedia entry claims it to be the eighth largest library system and fifth largest collegiate library system in the United States.

Bizzell Memorial Library, pictured above, at the University of Oklahoma (OU) has been a National Historic Landmark since 2001, due to a desegregation case decades earlier, in which an African-American student, George McLaurin, was initially denied admission, in 1948, to OU’s graduate law school and later to the regular reading room. The Supreme Court later overturned the segregation, allowing McLaurin to enjoy the architectural beauty of Bizzell’s Great Reading Room instead of having his own desk in the mezzanine.

The library system at Vassar College (coed since 1969) started out as a single room in 1865, with a collection of about 3,000 books and grew into eight libraries with over 1M volumes. The Thompson Memorial Library (TML), pictured above, was completed in 1905. It was named after former Vassar trustee Frederick Ferris Thompson, thanks to his wife Mary Clark Thompson. TML, which was further renovated in 2001, is a Federal depository library (since 1943), carrying 25% of FDLP (Federal Depository Library Program) titles. (FDLP depositories makes government publications available to the public at no cost.) The library’s “Perpendicular Gothic” style makes use of both gargoyles and beautiful stained glass windows. The architect worked in the seals of several academic institutions (some originally all-male, some originally all-female) as a reminder to Vassar students (women) that their education was comparable to the all-male institutions. The Vassar library systen has a number of special collections, and also acquires documents from the United Nations.

The L.A. campus of University of California has libraries in its history. UCLA, originally named the State Normal School, started at a site that is now the Central Library of LAPL (Los Angeles Pubic Library) system. UCLA’s Powell Library, aka College Library, pictured above, is in the Romanesque Revival style and was designed by architect George W. Kelham, and inspired by the Basilica of Sant’Ambrogio in Milan, Italy. It is the main undergrad library and is one of the original buildings of the campus. Completed in 1929, it was later renamed for former UCLA librarian Lawrence Clark Powell, who was also the Dean of the GSLS (Graduate School of Library Science) — now called the Graduate School of Library and Information Science. The UCLA library system had over 9.1M volumes as of 2012.

Brigham Young University’s (BYU) Harold B. Lee Library’s (HBLL) exterior to the main entrance, pictured above, is simplicity itself, thought that does not make it any less visually captivating, especially at night, with the lights on, against a darkening sky. Princeton Review ranked the HBLL in 2004 “as the No. 1 ‘Great College Library’.” The library can seat 4,600 people and has 98 miles of shelving. According to the ALA in 2012, BYU’s library system had nearly 4.3M volumes. However, other figures indicate anywhere between 6-8.5M volumes.

Not surprisingly, as the largest religious university in the U.S., BYU has a number of items of religious importance in their L. Tom Perry Special Collections Library (SCL), including a 1967 Salvador Dali-illustrated Biblia Sacra, a 1555 Martin Luther-translated Biblia, first-edition copies of the Book of Mormon, a page from a 1450 edition of the Gutenberg Bible and others. The SCL also houses four 4,000-year-old cuneiform tablets, and a variety of film-related items, including several Oscar statuettes, a Jimmy Stewart collection and a Cecil B. DeMille collection.

The University of Chicago, like many large libraries, has multiple libraries (totaling over 9.8M volumes as of 2012), including the John Crerar Library for the sciences (biological, medical and physical science), D’Angelo Law Library, Eckhart Library (math and computer science) and others. Possibly its most unusual is the Joseph Regenstein Library, designed in the Brutalist style and looking very fortress-like. It is the university’s largest library, and has the largest collection of print volumes in the U.S. as of 2010.

In sharp contrast to the Regenstein Library is the visually stunning elliptical glass dome that sits beside it, known as the Joe and Rika Mansueto Library. The latter is all underground, to preserve most of the original surrounding view. Mansueto Library is part reading room – just below the dome – as well as a book depository, five stories below ground, where an automated system can deliver books up to the higher levels.

The library system at JHU (Johns Hopkins University) consists of ten divisions across all of its campuses, with a total of over 3.7M volumes as of 2012. Like the Mansueto Library at the University of Chicago, JHU’s main library, the Milton S. Eisenhower (MSE) Library, is built partially underground. MSE’s design is such that all levels get some natural lighting during the day. The library is named after Dr. Milton Stover Eisenhower, younger brother of U.S. President Dwight D. Eisenhower, and who was a former president of JHU. However, it’s the George Peabody Library at JHU that has a majestic interior, as shown in the picture above. (For other architectural details such as the balcony railings, zoom in on the original source image.) The library had a four-story expansion open in Aug 2012, known as the Brody Learning Commons.