How Google is Changing Education

“Education lies at the very core of our company’s mission, to organize the world’s information and make it universally accessible and useful.” — Page and Brin

The founding fathers: Their education
Page grew up in East Lansing: parents were both computer experts
• Graduate of East Lansing (Michigan) High School
• Undergraduate at U. of Michigan
Brin: born in Moscow, Russia. Came to U.S. in 1979. Son of a mathematician.
• Graduate of Eleanor Roosevelt High School in Greenbelt, Maryland.
• Undergraduate at U. of Maryland

1995: Page and Brin met at Stanford.
BackRub: Their first collaboration, in 1996, a search engine. It operates on Stanford servers.
1997: Page and Brin registered Google.com as a domain on Sept. 15.
They named it Google, a play on the word “googol,” a mathematical term for the number represented by the numeral 1 followed by 100 zeros.

The impact of Google education (in one year, 2011)

Bringing Technology into the Classroom through…
• Chromebooks
• Time range tools
• Google Scholar (makes a broad range of academic research accessible to a global audience)
• Google Earth
• Google SketchUp
• You Tube videos
• Google Apps for Education (another plus: cost is O)

FACT: Glasses will enable users to get real-time information about the places, people, and objects around them, right on the lens of the glasses
• A new way to implement Education Apps
• Disruptive technology could get more disruptive
• Memorization will take a backseat to problem solving and complex thinking
• Traditional textbooks could be replaced
• Classes can take place…anywhere

Their task: Analyze veterans’ education to identify which programs, services and policies are most effective at helping veterans graduate. Further funding will follow.

On the downside…
Is Google Making Us Stupid?: Google is changing our brains
• A Columbia University study has found that Google and other search engines are literally changing the way our brains process and retain information.
• The study says rather than remembering things, we now simply retain the knowledge of how to find the information we need when we need it. 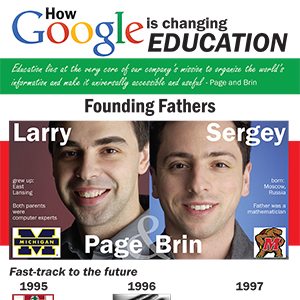