The modern boom of private education, empowered by recent voucher legislation and the No Child Left Behind Act, has helped to essentially re-segregate American schools. Let’s look at the history of segregation in American education and where we stand today.

Thomas Paine proposes education allowance for poor to middle-income families “to allow for each of these children ten shillings a year for the expense of schooling and half a crown for paper and spelling books.” [1]

In the 8-1 decision of Plessy v. Ferguson, the U.S. Supreme Court rules against Homer Plessy, an African-American who had refused to give up his seat on a train to a white man as required by Louisiana state law, claiming, “If one race be inferior to the other socially, the Constitution of the United States cannot put them upon the same plane.” [3]

The U.S. Supreme Court denies an appeal for an injunction against Richmond County Board of Education’s plans to fund a white-only high school and close down a black-only school in the same district. [3]

In Brown v. Board of Education, a case combining arguments against five distinct school boards across the country, the Supreme Court declared segregation “inherently unequal,” and therefore unconstitutional. In a subsequent ruling, the Supreme Court delineated a plan for state governments to implement school integration. [3]

Green v. School Board of New Kent County: A Virginia county “freedom-of-choice” plan creates separate black and white schools but gives all residents a choice of which school their children will attend. Because 115 African-American students elected to attend the primarily white school and precisely zero white students (and 85 black students) chose to attend the black school, the U.S. Supreme Court declared the plan ineffective and unconstitutional. [4]

Ohio Legislature enacts Cleveland voucher program, paying up to $2,250 in tuition per student, choosing from 49 eligible private schools, provided that the schools (a) operate within the Cleveland school district; (b) meet state education standards; and (c) accept students according to rules established by the superintendent. [5]

Hartford Board of Education approves a contract with Education Alternatives Inc., a for-profit company, to take over the school district.

The Supreme Court of Connecticut rules for the plaintiff, a fourth-grader at the time the case was filed in 1989, in the case of Sheff v. O’Neill, demanding that the highly segregated and privatized Hartford district be integrated.

15% of African-American students in the U.S. attend schools with less than 1% white students. [7]

14% of Hispanic students attend schools with less than 1% white students. [7]

Twenty years ago, the average minority student attended a school where 1 in 3 students were from low-income families. That proportion has since doubled. [7]

25%: Percentage of black students in the South who attended predominantly segregated schools (over 90% of student body comprised of racial minorities).

53%: Percentage of black students in the South (where desegregation orders have been removed) in 2014 who attend predominantly segregated schools. [9] 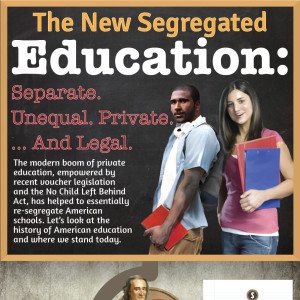